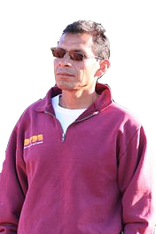 Javier Naranjo has been living in Santa Cruz County since his teen years, and attended Watsonville High School. He started running when he was 17 years old and has kept going ever since.  He attended Hartnell College and competed at State Championships in cross country and track.  Javier has participated in hundreds— if not thousands— of road races, placing 2nd and 3rd at IBSM. He has won many local and state races and has consistently placed in the Top 100 at Wharf-to-Wharf in the last 20 years.

Javier is a CIF-certified coach, and trains students at Soquel High School. He started coaching the SCTC youth cross country program in 1999 and has been taking kids to the Junior Olympics ever since. This year he has launched a new project with SCTC, Camp Track Team, for athletes that he considers ready to move on to the next level. Many of the kids Javier has coached have successfully transitioned into competitive running programs at the local high schools. He is proud to have played part in the lives of many young people, and hopes to continue passing on the experience he has gained in from his years of running.